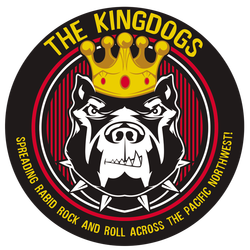 THE KINGDOGS have been described as “a blend of classic rock, punk and country-fried rock and roll, shaken and stirred and served up with loads of energy!”  The band came together in July 2008, with five musicians who’ve played together in different combinations since they were kids.  Seasoned vets of the Seattle music scene, you can expect them to play and perform at a high level, and have a good time doing it.  Their music is guitar-driven, heavy on 60s and 70s rock that makes you want to get up and dance!

Chris’ music career began as a teenager in West Seattle; you can see a poster of one of his first bands “WRAITH” in the Seattle music exhibit at EMP.  He later played drums with Ed & Stan in THE IMPACTS.  His namesake band “THE EAGERTONES” packed the clubs from Seattle to Portland to Ellensburg in the ‘80s, bringing skinny ties and high-energy punk & new-wave covers and originals to dancing, sweaty masses of Northwest youth, and opening for acts including The Ramones and The Romantics.  He’s done everything from hard rock and punk to blues, including CRYIN’ WOLF with Mike and Ken in the 90s. In real life, he travels from Seattle to Bozeman fixing broken stuff for Safeway Stores.  In terms of vocal style, let’s just say, you won’t have trouble hearing him.

Ken grew up in Ellensburg and his band BOYS WILL BE BOYS was a favorite of the CWU student body and The Ranch Tavern.  On moving to Seattle, he was in high demand throughout the local band scene, and that has never wained.  He’s usually playing in three different bands at the same time.  He’s now ½ of the greatest rock rhythm section you’ll ever see for free.  In his spare time, Chris sums it up by saying, “Ken builds houses for rich people.”  He does hang with a lot of rich and famous folks—ask him about Fabio.

Stan & Ed started THE BURLAP UNDERWEAR in 9th grade and had many groups after that, including THE IMPACTS with Ed & Chris.  In addition to mighty fine bass playing, Stan is the man taking care of all THE KINGDOGS sound and lighting needs, and helping out other bands/venues as well.  On the side, he runs a duty-free warehouse for SeaTac.  As a musician, the finest combination of German & Japanese engineering.  We dare you to catch a mistake.

Mike is a West Seattle native.  He and Chris played music together as kids, he was an original member of THE EAGERTONES, and has been in several other bands with Chris and/or Ken.  He currently makes a living doing stuff with computers we’ll never understand.  Mike likes to play fast & loud.  He can play most every rock song you’ve ever heard, and more; just try to stump him with any riff.

He's very mysterious, won't give us info for a bio--perhaps he's in witness protection, but we're super excited he joined the band.  He's married to Tanya, so he must be cool.

Founding member Ed Barbuti retired from the live music biz in 2013 and is enjoying life with his lovely wife in Orting.  He is always missed, and will always remain an honorary KINGDOG!!